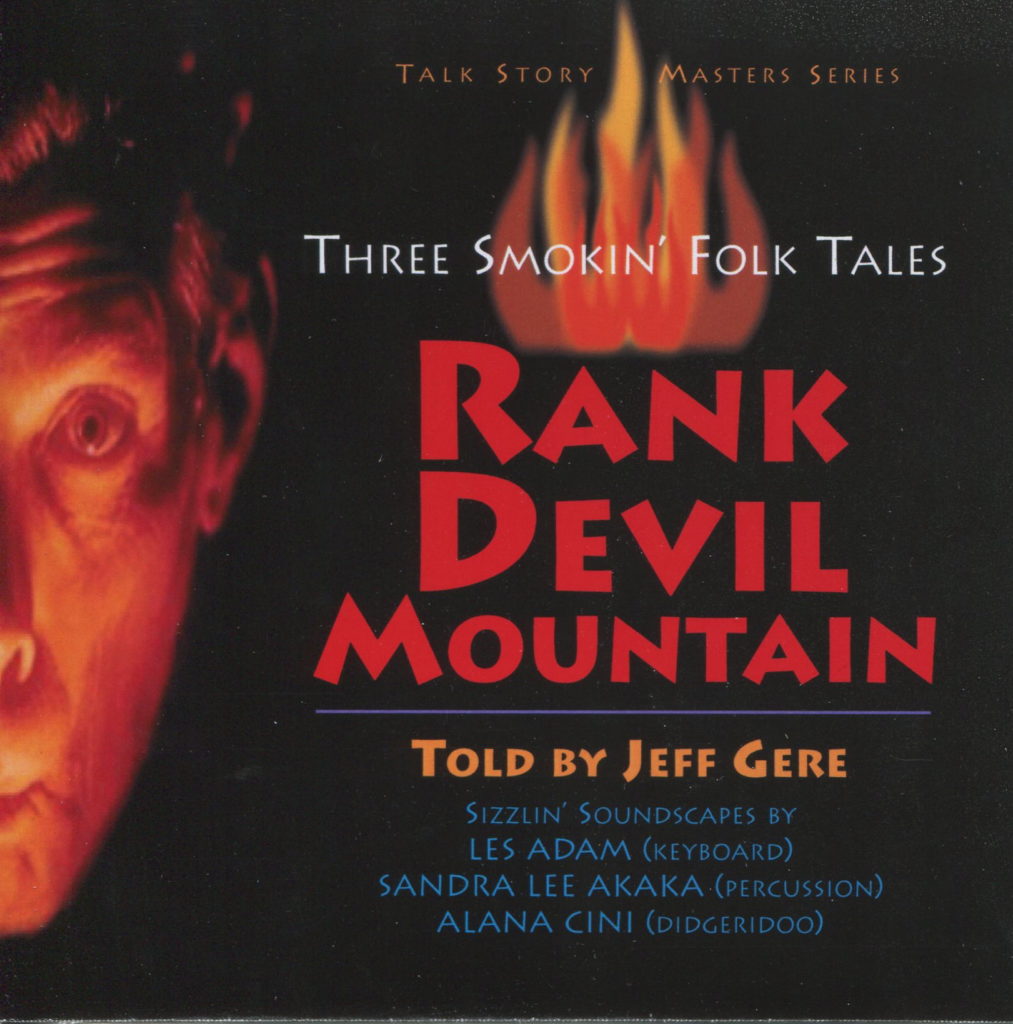 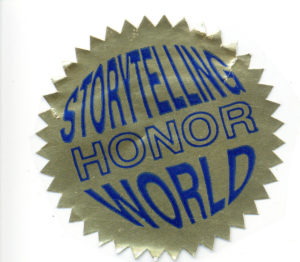 OLD RINK RANK (12:05) Take a defiant tennage girl, a posessive King, a small slip, and you get a princess in a deep hole with a gross grimy guy. But the STORY is in how she gets OUT.. and the FUN!

A BEAUTY, A DEVIL, & A SHEPHERD (23:00) A handsome stranger (the devil) carries the beautiful girl to Hell… and back. A shepherd’s joke sets the Devil free. 30 years later, the demon repays the favor. Will the Shepherd allow the evil King to go to Hell? Hold on- we’re going for a ride!

I walked into the Mana’o Radio studio for the first time, and it was occupied already by LES ADAM (keyboard), SANDRA LEE AKAKA (percussion) & ALANA CINI (didgeridoo). They’d been invited to ‘jam’ with my storytelling. ‘How does that work?” I said. “We don’t know yet.” said Les. “Well, hold on, ‘cuz I just drove throgh the smoke of the burning Kahului Shopping Center to get her- we’re doing fire here today, We’re gonna BURN IT UP! Oh, they created amazingly vivid soundscapes! Yep, this CD is SMOKIN’! It was given Honor status by the World Storytelling Awards for Best Storytelling Recording in 2007.

My CD, RANK DEVIL MOUNTAIN, received ‘HONORS’ as an ‘Outstanding Storytelling Recording’ for 2007 from the national ‘STORYTELLING WORLD’ Resources Project (out of Tennessee). I was surprised-  it’s a really BOLD recording.  I threw it at them to sorta shock ‘em and they picked it!

That’s an awsome CD! I love the way your start “singing” parts to match the music as it flows.     CHARLES JOHNSON, SAN DIEGO

This folktale gets a kickin’ update as Jeff Gere’s gymnastic telling is extended by piano, percussion, and didgeridoo! A princess is housed on top of a glass mountain. Any boy who can get to her will be King, but slip on the slope and you’re swallowed! Of course, the Princess slips, falls down a deep well, and amidst the trash is a house inhabited by a disgusting Old Rink Rank. He threatens her and makes her his slave. Each day he ascends. One day she shuts him out, except for an upper window, where she traps him. With the secret of his ladder, she escapes, returns with her father and kills her oppressor (and a gentler ending given Jeff by a little girl). This recording on the CD, Rank Devil Mountain, won Honors as Best Storytelling Recording in 2007 (Storytelling World).

Hold on! This folktale gets a kickin’ update as Jeff Gere’s pyrotechnic telling is extended by piano, percussion, and didgeridoo! A handsome man gets a beauty to jumping on his back, and he flies away… to Hell (hear what it sounds like there!) But this beauty won’t get off the devil’s back, and forces him to return her to earth. A shepherd fools her to jump onto HIS back, and slips away! The Devil is not laughing at this joke, and promises to repay the Shepherd. Thirty years later this Devil comes to the fatter, balder Shepherd, telling him to intervene on the next two nights to save two kings  from this Devil. Yes, he receives bags of gold. But on the 3rd night, against the Devil’s instructions, he chooses to save a truly evil king (political & phosophic implications) saying the Princess is following to punish the Devil again! A happy ending to a smokin’ adventure, which won Honors as Best Storytelling Recording in 2007 (Storytelling World).

Hold on! This folktale gets a kickin’ update as Jeff Gere’s pyrotechnic telling is extended by piano, percussion, and didgeridoo! Jack seeks his fortune, is joined by a ‘shadowy man’, and arrives in a mourning village oppressed by a curse by the Evil Mountain Spirit: 3 times someone must tell the Princess what she’s thinking. Nine have failed- she sucks the blood from their body. In three thrilling trips Jack flies behind the Princess to the heart of the mountain to witness the Evil Spirit instruct her, and (of course) beheads it on the 3rd trip. They are wed (of course) and following the ‘shadowy man’s’ instructions (gorgeous detail) sheds her of the curse. This intense musical tell won Honors as Best Storytelling Recording of 2007 (Storytelling World).