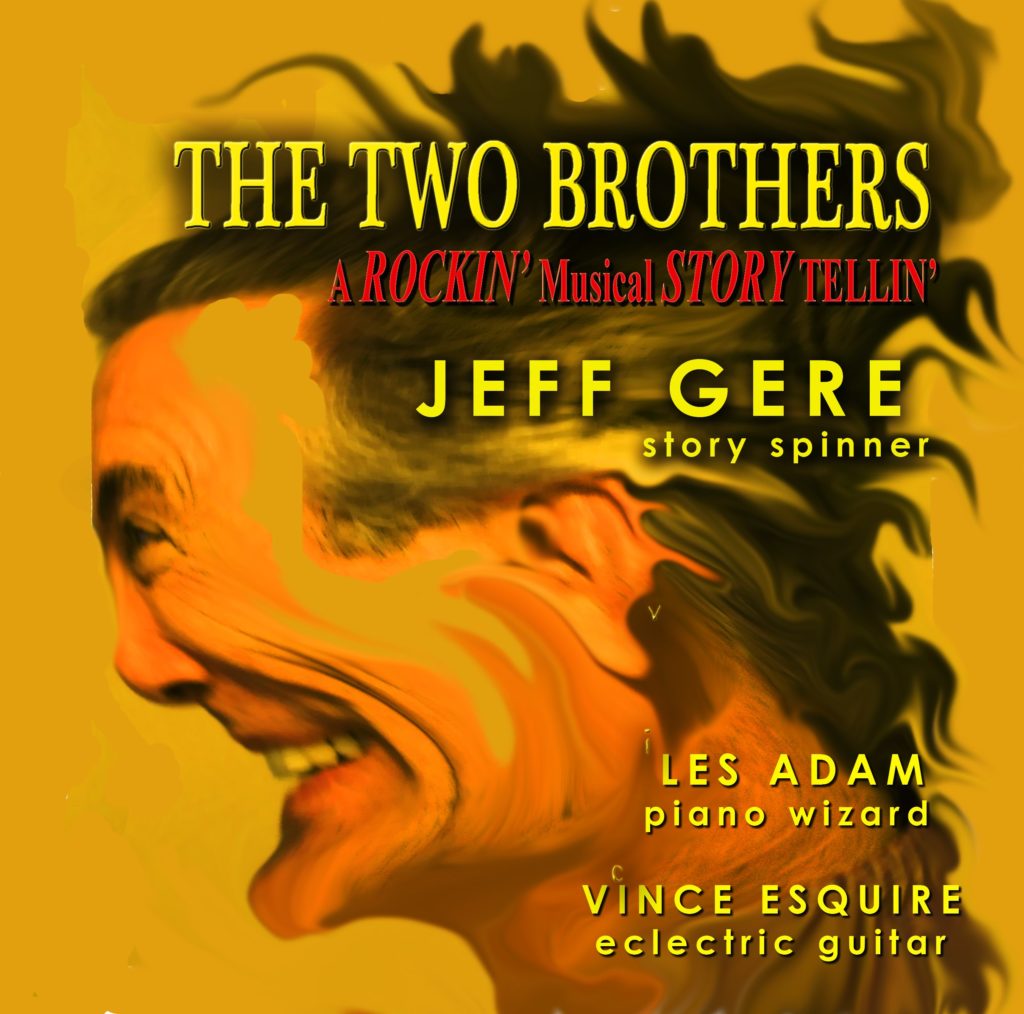 “Playground kids convinced me of the power of THE TWO BROTHERS. I love the demanding length, wacky characters, and intertwining scenes. Then in one long kickin’ session we three  just TOOK IT ON! Telling it in sections, quickly making agreements, never revisiting anything, we rode each creative wave together to a stop.

I’ve NEVER HEARD a story TOLD like this! I’m in awe of Les and Vince’s RICH soundscape textures, all improvised – and stamina. I speaked good and my subconscious made narrative leaps. Don Lopez (engineer) added wonders. We made a little jewel here-  it SINGS! We’re AMAZING! I surprise MYSELF! It’s WAY better than I’d hoped and I’m glee-filled & giddy sharing it with YOU!” -Jeff Gere

VINCE ESQUIRE is one of Maui’s home-grown twenty-something stars who’s toured with Greg Alman. Les invited Vince, who met Jeff for the first time for this recording.

I finally listened to Two Brothers edge to edge. Thanks so much for this extravagant journey, zany, creative, varied, and wild at heart. In a word, Jeff Gere to the core. VERY WELL DONE.

The fabulous Jeff Gere from Hawaii, working in collaboration with outstanding musicians Les Adam on the piano and Vince Esquire on the guitar, create riffs like jazz musicians.

Jeff’s CD is unusual not only because of his creative collaboration with the musicians but also because he tells one long story, with many individual exciting adventures, for the whole CD. This technique is very similar to the way the bards of old told their tales… This requires very special skills

and the difficulty of doing it scares many storytellers away.

Ah, but not our Jeff. This CD was created in a very special way. They did it in one session, section by section, never replaying anything. As Jeff says, “We just rode each creative wave to a stop.” Now that’s storytelling at its core… just telling story after story in the best improvisational style. And that takes guts! It’s not for the faint of heart!                Jackie Baldwin intro on Story Lover’s Radio Show